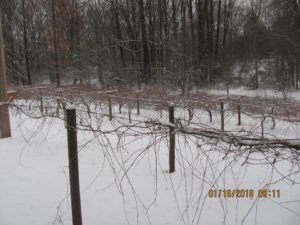 This is the second week this winter that much of the Southeast is having winter temperatures that are below our normal averages. We have seen snow in unusual places, we have seen days when the temperature doesn’t get above 32, and we are only at January 15th.

Muscadines are a tough plant, they are native to the southeastern United States and in general usually come through the winter very well. We have found that young vines(4 years and under) rarely have cold weather issues, however vines that are older sometimes do not fair as well. Below are some recommendations on how to have the healthiest plants and the strongest plants in order to come through the coldest winters without any damage.

2. Always fertilize after fruit set (early to mid July) with a Calcium Nitrate fertilizer application. Once the fruit appears on the vines that is when they have to work the hardest, by fertilizing in July, we are giving the plants some extra reserves to get through the harvest at a high level of health.

3. Irrigate your vines and if we are warm and dry continue to irrigate through October and into November.

4. Most importantly manage your crop load. If your vines look loaded with fruit they probable are and we recommend the removal of 20-25 clusters of fruit shortly after fruit set in early July. We want a 60 lb per plant average in our vineyards, if you over-crop the vines they will be weak headed into the winter months.

I have no problem planting in any month of the winter regardless of where you are located in the Southeast as long as we do the following.

1. After planting go ahead and prune the vine to the longest runner and get the vine staked to a cane pole and off of the ground. By staking the vine, hard freezes and frost are less likely to damage the buds since they are off of the ground.

I believe the best time to plant muscadine vines are from November 15th to about April 1st, earlier is better than later to me.

If we plant later in the winter/early spring we can have roller coaster weather and the vine hasn’t had as much time to adapt to its new location and can sometimes be slower to break bud and start growing.