A Hard Lesson To Learn In The Vineyard

About 2 months ago I was on the phone with a muscadine grower in South Carolina. He had a very good crop the fall of 2018, but his vines had not put out this spring. The varieties he had planted are vigorous plants and rarely over-crop, so I was perplexed on why his vines failed to break bud. In our conversation I asked about fruit load, chemicals used during the season, fertilizer applications, and where the vines were being grown. I was trying to find a cause or better understanding of what could of caused the vines to die. Cold weather injury was a non issue since the winter had been mild, and the answers to all of my questions fell in line with normal vineyard management. I was running out of explanations and then I asked had he done any pruning on the vines.

…His response was he had pruned the side growth all summer and kept the growth at about a length of 2 feet. He explained it was easier for him to pick the grapes and that it allowed sunlight to penetrate the canopy to get to the fruit.

I had finally found the explanation of why his vines failed to leaf out.

When side growth is pruned during the summer to closely it puts a lot of stress on the vine when there is fruit present.

Our ideal side growth length is about 4 feet, this allows enough of a vine canopy to effectively ripen the fruit and prevent stress from occurring on the vine. When the customer only allowed 2 feet of side growth, in essence there was only 1/2 of the recommend growth to ripen the fruit. The vines workload was too great, there were not enough leaves to support the ripening process. It was like a go cart pulling a tractor instead of a tractor pulling a go cart.

Just this week a customer sent pictures of their vines. The vines were very late to break bud, the leaves were small and deformed looking, there had been no blooms or fruit, and there was very little new growth. Once again the vines had been pruned throughout the summer limiting the needed side growth that would have prevented stress. Even if the plants had not over-cropped, they felt like they were over-cropped because of the lack of side growth needed to ripen the fruit.

The photos below are of vines that over-cropped or were overly stressed due to a lack of side growth during the ripening process. The vine feels as if it is a go cart trying to pull a tractor versus a tractor pulling a go cart. In my opinion this is the most devastating event that can occur in a vineyard, this scenario can lead to cold weather injury and a lack of production for several years.

The following are recommendations on the best way to get stressed vines to recover as quickly as possible.

1. Apply a high nitrogen fertilizer to encourage as much vegetative growth as possible. Apply 8-10 ounces of Calcium Nitrate mid June and again mid July. Apply the fertilizer in a 15 inch circle around the trunk, do not water in the fertilizer.

2. Prune the trunk to a height of 3 feet, allow a new sucker to develop off of the trunk and retrain as if it were a new plant.

In our vineyards the only time we will prune side growth during the summer is when the vines are touching the ground. We will prune the side growth back to a height of about 4 feet, any pruning that is shorter than the 4 feet can cause damage in the vineyard. 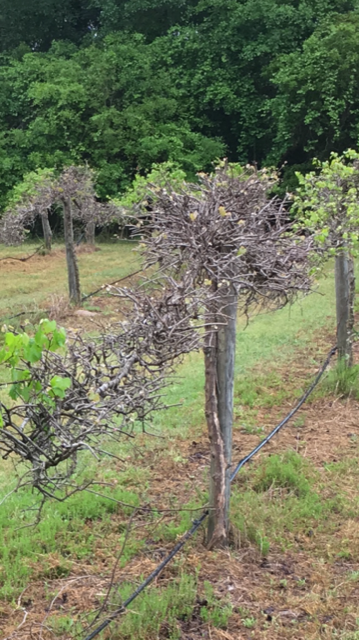 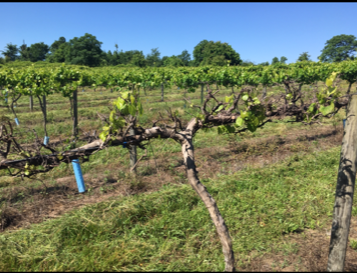