When to Prune Muscadines 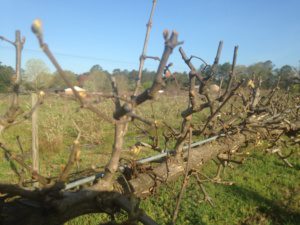 This is a question we are often asked and hopefully this information will guide you on when the best time to prune is.

In the 1970’s through the early 80’s the accepted time to prune would be once the vines were dormant around Thanksgiving and try and finish pruning by early January. The commercial muscadine industry was very young at the time and there was not a lot of information to dispute this practice.

In January 1983, we had temperatures that reached 7 degrees below 0 after a relatively mild December. The UGA Griffin Experiment Station had 4 rows of Carlos vines planted, 2 were pruned in early December and the other 2 rows in early February. All of the vines pruned in December were killed to the ground, while all the vines pruned in February were fine and healthy.

This began the mind set that a vine that has not been pruned can handle colder more severe weather than a vine that has been pruned. As a general rule our coldest temperatures occur late December – January, so we now wait til early February to start pruning.

We begin pruning in early February and try and finish by the end of March.

Hope this helps with scheduling when to prune.